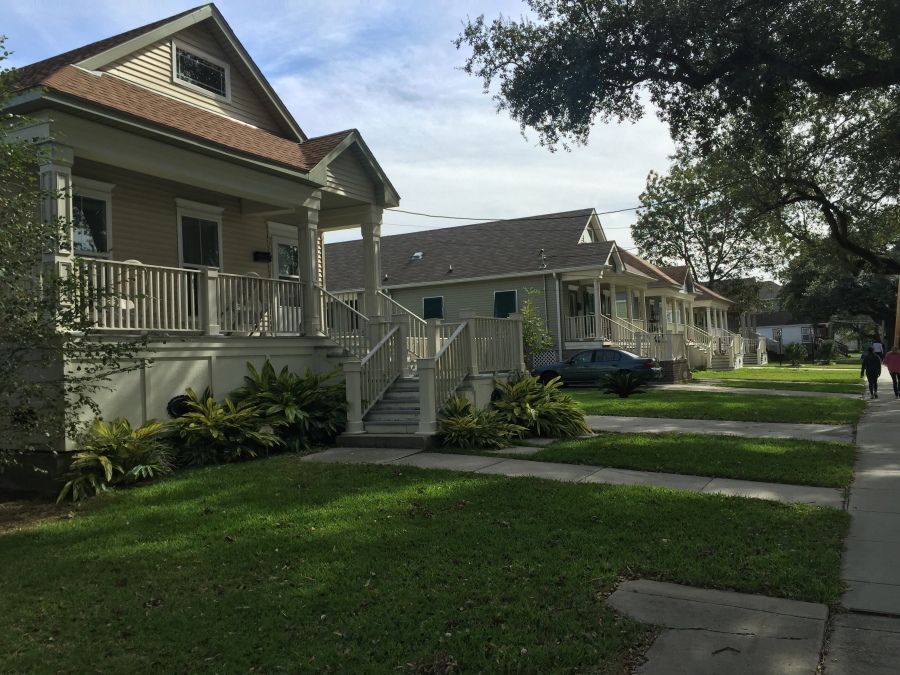 On January 18, 1914, a newspaper announced, “the Broadmoor Improvement Association has been organized by the residents of the new subdivision at the intersection of Napoleon and Broad streets.” By December of 1914, land for Broadmoor Park, “at the turn of Napoleon Avenue and Broad Street,” had been donated to the city by New Orleans Realty. All of Broadmoor’s defined territory was once swamp land until the 20th century, and the city has constantly had to develop and maintain the town’s drainage system in order for houses to be built there.

Broadmoor includes some of the lowest lying ground in New Orleans, and experienced up to fourteen feet of flooding after Hurricane Katrina. The first houses built at Broadmoor were high-rise houses due to fear of flood damages; building high rise homes seems like the only option available when some parts of Broadmoor lie three-to six-feet below sea level, “We’re at the bottom of the bowl,” says Leonard Baudoin, the Community and Economic Development Director of Broadmoor.

A rebuilding commission set up by Nagin said, “If half of Broadmoor’s residents did not return in four months or less, their homes were going to be razed, and the land was going to be turned into a park.” Three days after this announcement, the residents of Broadmoor took action and started a protest. A meeting was called to work out a solution and more than 600 residents attended. People came from as far as Houston and Baton Rouge. They did not want to leave the future of Broadmoor up to anyone else.

Amid the struggle to return in New Orleans neighborhoods, one community that returned 80 percent of residents, despite suffering incredible devastation, was Broadmoor. Broadmoor “lead the city in people returning to the neighborhood and rebuilding, well over 80 percent of the people returned after Katrina,” says Baudoin. Some Broadmoor residents were living in the second floor of their two story homes while work was being done to gut and repair the lower levels of their homes.

Broadmoor instills a strong sense of community through their businesses. After August 2005, the neighborhood organized and began to focus on rebuilding itself by forging partnerships with organizations like Harvard University and the Clinton Global Initiative and a written redevelopment plan that the community still follow. A few businesses that help round out Broadmoor on local level are, the Green Dot Café by Liberty’s Kitchen, El Pavo Real, and Laurel Street Bakery.

Hillary Guttman of the Laurel Street Bakery says, “What I remember in that period following Hurricane Katrina was that the we were pretty beat up, the whole city, but people would walk into my bakery and smiles would appear. Old men with challah bread loaves under their arms, chatting away, talking about the day-to-day stuff even if for only a few moments.”

She also recalls people telling her that her bakery was the only place that made sense during this time of rebuilding a city. “These people were coming from the chaos of flooded houses and insurance adjustors, and the bakery provided a community space.”

Hillary believes that communities and towns have lost something from the old days when a neighborhood bakery served as a valuable part of the community. “It’s time for a resurrection.” In keeping up with not only the population and communal changes around Broadmoor, Hillary has also been keeping up with the new dietary needs of the locals. “People want preservative-free, homemade baked goods made from high-quality ingredients and they deserve it. They deserve to see, smell and taste baked goods that parents and grandparents still savor.”

With all that New Orleans has gone through post-Katrina, and the lengths Broadmoor has gone through to come back stronger than before is noteworthy to Hillary and something that needs more attention. “The people of Broadmoor deserve a bakery that serves the community and becomes part of it… that’s what Laurel Street Bakery delivers.”

Today, Broadmoor is home to many families, young professionals, and students of nearby universities. Broadmoor is a neighborhood with more than 7,000 residents and consists of homes, buildings, churches, a public library, a school, one small park and commercial and historic buildings.

During the recovery of Broadmoor, the Wilson school has undergone $29 million renovation, the Rosa F. Keller Library and Community Center is one of the best libraries in the city, and there are lots of free programs available to residents. More than $8.7 million has been invested in restoring the Washington Avenue and Broad Street Business Corridor, which plays an important part in the Broadmoor plan. With the help of local developer Green Coast Enterprises, people can shop, eat, buy a home, receive medical services, and work on starting their own businesses all within walking distance.

What makes Broadmoor special is their pride in building a real sense of community amongst their residents, and the residents don’t mind sharing this with the association. “The kind of feedback that we get is a real sense of community, a lot of people like the diversity of the neighborhood, a lot of support from friends and neighbors. The programs that are offered in the neighborhood between the library community center, and the arts and wellness center, just some of the things people can be involved with in the neighborhood,” says Baudoin. “Other communities are just more residential; Broadmoor is more of a community.”

Demographically, Broadmoor’s population is comprised of 67% African American, 26% white, and 4% Hispanic. “There is a very wide range, very diverse. We would say that our neighborhood mirrors the demographics of the city as far as ethnic races, and income.”

Rubi Ferras, a student at Tulane University, chose to live at Broadmoor because it was ideal for her. “Broadmoor is on the outskirts of Uptown, but the rent is really good for the ‘Uptown’ area, and it was really close to school, that’s why I chose Broadmoor.” The main boarders are Nashville Avenue up to Claiborne, down Claiborne up to Toledano Street, down to Broad Street, that’s the natural boundaries of the neighborhood.

“It is pretty much maintained in that area since the city is a city of neighborhoods, it wouldn’t expand. The neighborhood is a natural branching out in the way the city grew from the French Quarter to Uptown,” says Baudoin.

Broadmoor continues to instill a strong sense of community even when it comes to raising their funding, “We get some of our money from the collection of that parcel fee, from neighbors, residents. Everything else is from foundations and donors as well,” say Baudoin. The neighbors, residents, and organizations, the supporters of Broadmoor across New Orleans want to see this neighborhood continue to strive in being a model neighborhood for the rest of the city.

Not only do the members of Broadmoor support each other, but non-affiliates also supports what Broadmoor stands for, and their determination to come back, “There’s always a large group of volunteers within the neighborhood who work towards rebuilding. The Association themselves did a lot of rebuilding and construction of homes through a lot of government funding that was available at the time,” Baudoin adds.

Rubi adds, “It’s quite, quaint, people walking their dogs, not a lot of ruckus.”

Broadmoor is a living community that hopes to inspire other New Orleans communities, “we want to be the model community of the city”, says Baudoin.

However, Broadmoor still has a lot of improvements that need to be made post Katrina. Rubi notes, “The people next door to me, their house is falling apart and they’re not doing anything about it. They’re just leaving it like that, and same with the house down the block; they’re not in great conditions.”

Besides the relatively named ‘Uptown Area’ of Broadmoor, Rubi’s house is also experiencing problems post Katrina, “My house really got destroyed during Katrina, even the back shed, which is still really molded infested. My particular home is a shotgun home, which is a little more difficult to fix up, but half of the house is slanted, tilted downwards, the ground under it is not stable since it is built on swamp land. So doors aren’t completely aligned with the bottom of the doorway.”

Broadmoor is a neighborhood that deserves recognition for their coming back better than before. Not only have they been able to follow through on their motto, and redevelopment plans, but also they’ve managed to expand themselves and become an ideal community. Although the neighborhood still has some work to be done, as Rubi Ferras notes on the living conditions of certain homes, Broadmoor is moving in the right direction.

If you’re still wondering, why would someone want to build a house, establish a business, let alone start a community in an area that is all swampland and constantly needing to reinstall drainage? Baudoin’s response is, “At one time swampland was a large majority of the city, New Orleans is below sea level; so that question would be, why is there a city?”

Lucille Roemer is a senior at Tulane University enrolled in a five-year Masters degree program. She will be graduating from Tulane with her MA in English during May 2017.