If you had asked young Chris Finney what he wanted to be when he grew up, he’d give you this simple answer: Renaissance Man.  Beyond this catchphrase, though, he wasn’t sure what he wanted to do.  His first love was music, but, like many other aspiring rock stars, his passion exceeded his talent.

One night at Jimmy’s, now known as “The Willow”, he was playing bass for his high school band, which the members had named “80 Proof”–“a tight little unit” that played “lots of Van Halen covers,” as Finney describes. “This is Metairie we’re talking about here.”  After the show, he received $20 which would be split among the band’s four members.  Whenever Jimmy complained about the low pay, he remembered where the show’s revenue was going: $125 to the sound guy, $60 to the bartender, etc.  These guys, as opposed to the bandmembers, got paid even if no one attended the show. 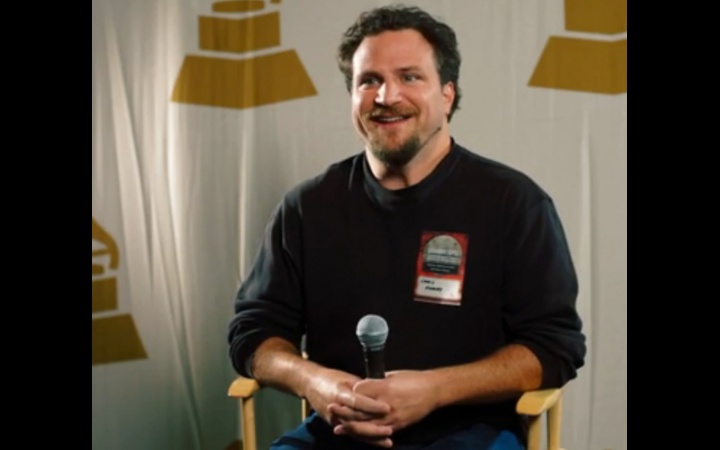 That night, Finney decided sound was where his true talents lay.  Thinking realistically, he realized he “had no right to be on stage with the Neville Brothers, except that [he] could do sound for the Neville Brothers.”  Even if he couldn’t be in the band, he wanted to be part of the action, because “being in the audience just wasn’t enough.” Thirty years later, he’s used his entrepreneurial spirit—along with his technological savvy and a fascination with microphones that borders on fetish—to etch his name onto the album credits of just about every major musician in New Orleans.

After a lifetime of experience in the bizarre universe of the New Orleans music scene, Finney has as good an appreciation as anyone for the quirks that make it noteworthy, as well as the pitfalls that prevent it from becoming an industry hub like New York or Los Angeles.  He’s spent time in those cities too, and while he appreciated New York’s intensity and L.A.’s laidback vibe, he could never stay away from the city of New Orleans for too long.

Anyone who visits New Orleans for work-related reasons will tell you that business is done a little differently here, especially in the music industry, where deals are signed with handshakes and “there’s no such thing as a secret because everyone knows everyone else’s business.”  This close-knit, easy-going mentality has produced some of the most important moments in music history, as well as some of its most colorful characters, from Louie to Kermit Ruffins to Dr. John.  It imbues New Orleans music with an intangible quality that people have come to know as the “New Orleans sound”.

Finney, who has recorded about a million different manifestations of the “New Orleans sound”, is wary of the term, because in a city as culturally diverse as New Orleans, it simply does not exist.  He does, however, see a unifying factor that separates music created in New Orleans from music made elsewhere, a certain joy or buoyancy that permeates all things New Orleanian.  “Even in the heavy dirges of a funeral, there’s still that expectation that we’re gonna party after this.”  This resilience has helped New Orleans through its roughest patches, from natural disasters to political corruption scandals.  If music is a recreation in other cities, it is a religious experience here, as well as a way to “lay your burden down.”

When working with out-of-town artists, Finney has always noticed their deep love and respect for New Orleans.  Robert Plant, “a freakin’ encyclopedia of world music,” showed a tremendous reverence for the New Orleans tradition while recording with Finney, and it is hard not to if you consider how much this city has influenced music, both nationally and internationally, over the past century.  For most musicians, coming to New Orleans is a sort of Hajj.  But as much as they enjoy visiting the city, established acts rarely stay in New Orleans for very long, the main reason almost always being money.

“Cool” is a word often used to describe New Orleans.  Jazz is cool.  Funk is cool.  Live shows are cool.  But money. Money is not cool.  Planning is not cool.  And men in suits holding contracts certainly are not cool.  Artistic integrity may be New Orleans’ greatest core value, but it doesn’t often lead to viable business models.  A handshake deal might feel more authentic than a binding legal agreement, but it has been the undoing of many talented artists.  There’s an almost aggressive disdain for anything business-related, a superstitious mentality that, as soon as a contract enters into the equation, music becomes secondary.  In Chris Finney’s opinion, it is this sort of thinking that has prevented New Orleans from competing with the “New Yorks” and “L.A.s” of the world. And he wants to fix that.

Finney proposes a two-fold cure to this magical thinking that’s keeping the New Orleans music business stuck in the mud.  His short-term solution: to keep up the post-Katrina influx of out-of-town talent into the city.  His logic: “to cure an addict, you need to find something he wants more than addiction.”  An opportunity to work with a Robert Plant—someone who won’t play a single note before he sees a contract—can break an artist of his addiction to bad business.  The long-term solution is to teach the next generation of New Orleans musicians about the business side of their craft.

As the lead instructor at the Fredman Music Business Institute (a branch of the Trombone Shorty Foundation), Finney shows high school musicians how to turn their passion into dollars.  Alongside members of the Soul Rebels brass band, he teaches kids about live and studio recording, event production, touring, marketing, and—perhaps most importantly—how not to get screwed by unscrupulous agents, managers, and label reps.

“It’s gonna take about a generation,” Finney believes, to break the current stigma against smart business in New Orleans.  It won’t be easy, but with the right mix of local legends and out-of-town heroes to serve as role models for future musicians, the next group of great New Orleanian musicians could finally break away from the “cool” that’s held their predecessors back for too long.