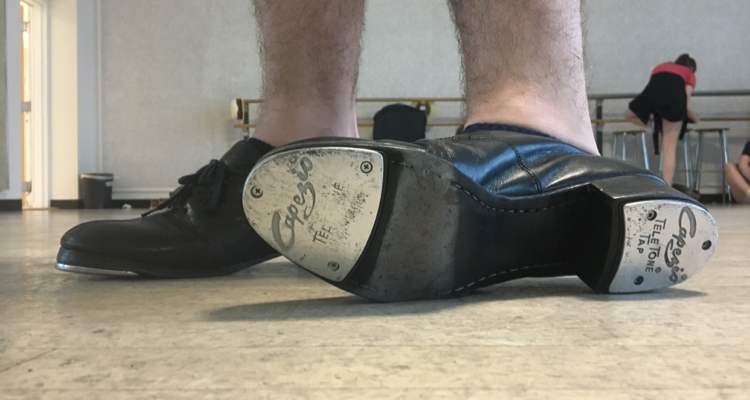 Jazz music was born and raised in the Crescent City, so much so that the term “traditional jazz” refers to more songs from New Orleans than from almost anywhere else. Created by a combination of slave tunes and musical instruments, jazz blossomed in New Orleans and has been an integral part of the city ever since. However, upon the creation of jazz music, jazz had a twin. Tap dancing comes from the same parent influences as jazz music, yet for unknown reasons it never gained the same popularity in New Orleans. While the collaboration between jazz music and tap dance is not a rare sight in jazz clubs in most major cities in the United States, it’s peculiar that in a place known for its music, tap dance is nowhere to be found. The history of tap dance parallels that of jazz music in every way: it has the same origins, was created around the same time, and it spread in a similar manner throughout the country. Why, then, is there almost no presence of tap dance in the bustling music scene of New Orleans?

Like jazz music, tap dance evolved from the rhythms and songs brought to the United States by African slaves. Those distinctive tip-taps of metal on wood carry a long, meaningful history, and it’s one that is often overlooked in New Orleans. In fact, written tap dance history is almost impossible to find in New Orleans, however experts believe that it did once flourish here and are now working to spread awareness.  “There was a live slave trade in New Orleans, so slaves came from Africa with these innate rhythms. Tap dancing and different types of rhythmic dancing replaced the drums, so that had to have been going on in and around this area, just as a means of communication and expression. Rhythms and body drumming, percussion, that’s all a part of the expression that the Africans brought here,” says Adrianne Mitchell, a native New Orleanian tap dancer. “We haven’t found a big history of it. There’s tap dancing here, but not at the level of other places around the country. It either is so disconnected that it’s not evident or so far spread that it’s not evident. We’re definitely trying to bring it to the forefront, we’re trying to raise the tap community.”

Heidi Malnar, Mitchell’s colleague and the founder of Theater on Tap, a tap dance company based in New Orleans, adds that “rhythm and clapping were used as a way to communicate without words because you were not supposed to talk while working. So they would find ways to outsmart the people who were keeping them and making them work. That communication evolved into more structured things.”

Mitchell and her team are spearheading a movement to bring organized tap dance to New Orleans. She created the annual Jazz City Tap Festival, which began in October of 2015. She brings in world-renowned tap dancers from all corners of the country for a three-day extravaganza of classes, lectures, and food, all to help tie tap dance into the rich music culture of New Orleans and foster connections between the New Orleans tap community and the rest of the country. When asked why she started the festival, she says, “it’s what’s unique about New Orleans that makes it a natural place to grow a tap culture. We’re in New Orleans where all this wonderful music is, the standards which most tap dancers perform to. Why don’t we have a tap festival here? It doesn’t make sense.”

The annual festival is highly attended by local tap dancers who train in various pockets of the city. One of the newer “pockets” is Malnar’s dance company, Theater on Tap. Malnar danced with the Chicago Tap Theater before moving to New Orleans, and recognized a serious need for a more organized, connected tap dance community. “The cultural blending and the history of New Orleans lends itself well to tap dancing, though it’s never really been here before in an organized, formal way. But, it’s not really an organized, formal place, so it kind of all works out,” Malnar says. “Here, there was not really a place where people could go to find tap in a community accessible way. We made it easier for people who were excited about it to find a couple places to do it. That was kind of my mission out here. I thought, ‘if I’m going to stay in New Orleans then I need to start something.’”

The members of Theatre on Tap attend Jazz City Tap Fest every year and perform at other local festivals like Jazzfest and French Quarter Fest. The company also offers drop-in dance classes for dancers of all skill levels, increasing community accessibility to a studio environment. As a tap dance instructor, Malnar utilizes tap dance to teach her students about the culture of New Orleans. “I feel like the majority of my education about New Orleans comes from what I know about New Orleans music. I’m surrounded by New Orleans music and culture, and definitely tap has been a huge part of that educational learning process for me,” says Annie Taffaro, an 18-year-old student of Malnar’s.

Tap dancers born and raised in the city are not lost on the fact that being a tap dancer in New Orleans carries significant and unique historical weight. Sean-Michael Bruno, a 17-year-old member of Theatre on Tap’s junior company, is one of those dancers. “I definitely think we have an advantage dancing in New Orleans, because rhythm tap and jazz music are so prevalent here. Say you grew up tap dancing in New York, which is where Broadway is. Yes there’s rhythm tap there, but because most of us were born and raised here, it’s in our blood. We know how to have that natural flow through a song, whereas in other places, that might have to be taught to a dancer. Here, it’s just part of the culture.”

To those dancers not born in New Orleans, the difference is clear. “Tap is all around New Orleans. It’s so integrated into the culture, into the jazz, and all the other influences that I definitely feel a difference between the tap communities,” says 16-year-old Hannah Hubbard who was born in California.

These new tap institutions are not only raising awareness about New Orleans’ historical influence on tap dance; they’re also utilizing tap dance’s rich history to promote an important aspect of African American heritage in a city where 60% of the population is African American. “We’re trying to make kids, particularly African American kids, aware of the contribution that African Americans made to tap dancing, which is an American art form,” explains Mitchell. “It’s not like Ballet that came over from Europe. Tap dancing was cultivated and developed in America, and so it’s important to make African Americans realize this is part of their heritage as well. When we bring in tap artists, we’ll bring them to schools, do lecture demonstrations, and get them involved. With the underperforming schools in New Orleans, anything that you can bring culturally to the kids enhances their educational experience.”

The amplification of tap dance and its history throughout New Orleans can paint a more accurate picture of the contributions that African Americans made to society today. Widespread access to tap dance will provide legitimacy and stability in a community that needs and deserves it, and it will allow for young people to thrive as artists in a supportive space. The more visibility tap dance is getting in New Orleans, the more people are showing interest in joining the community.

Bruno recounts an experience he had after an improvised performance at a local venue. “We did the improv, and miss Heidi told me that after the show this little African American boy came up to her and said, ‘oh, well if he can do it, I can do it too!’ It’s nice to know that by us doing this, it shows that you don’t have to be an old professional on Broadway. You can start now and you can still get out and make a difference.”

It’s people like that little boy who will be the most positively affected by an increase in visibility of tap dance in New Orleans. Mitchell has brought her foundation into one public school at the moment with plans to expand as the foundation grows. This access to tap dance also creates connections between tap dancers from New Orleans and those in better-established tap dance communities around the world. “Tap has allowed us to branch out into other places around the country,” says Ross Quinn, a 17 year old student of Malnar’s. “Heidi’s from Chicago, and I’ve gone up there and taken classes from the people that taught her. We’ve met people from Boston, Chicago, everywhere.”

Tap dance provides an outlet for students and also gives them access to a supportive, creative community all over the world. Should students choose to stick with it, it can be a gateway for entire careers, the ability to travel, and a connection to one of America’s oldest art forms. In a city ripe with rhythm and music, it is quite possible that this community may soon flourish to become a hub of innovation and connections for tap dancers while providing an artistic outlet for kids and increasing awareness of one of the original American art forms.

Bruno adds that “tap is such a universal language. It all comes back to the basic dance steps. So if we’re tapping in New Orleans, but we go to a tap festival in India, and they say ‘shuffle,’ everyone knows shuffle.”