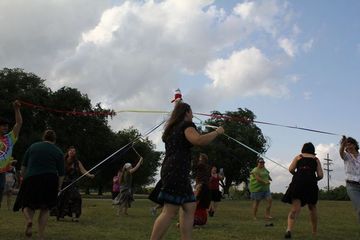 If tradition holds, Ty Siddiqui can be found on Friday night, surrounded by her fellow Pagans celebrating the Sabbath. Ty stands, smiling, indistinguishable among the buzzing crowd. Her unruly black hair sways in the breeze. Her eyes shift slowly from person to person, appraising every face. As the sky grows dark, marking the beginning of the ceremony, the group grows quiet. There is no clear leader, but one voice echoes above the crowd, “Welcome.”

Despite Lamplight Circle’s growing popularity, the group itself is relatively young. “I founded it in 2007… and I had just wanted to get into the Pagan community for a long time, but it didn’t seem like much of a community to get into, so I decided to create my own community.”

Ty’s spiritual journey to Wicca and Paganism inspired the pluralistic basis of Lamplight circle. “I came across Witchcraft and Wicca, and the more I read about it, the more I felt I like I had come home.” Ty paused for a moment before continuing, a smile creeping onto her face. “I felt like I had connected to something that was universal and plugged into a lot of universal truths, and yet didn’t try to slam anybody else’s belief systems down. Which is exactly the kind of person I am.”

Unlike many other religions, Paganism does not subscribe to a clear hierarchy. Leadership within Pagan groups follow a horizontal lineage, which is ultimately what drew Ty, and many others like herself, to begin practicing Paganism.

Of Paganism’s autonomous nature, Ty says, “…it wasn’t an organized religion. It doesn’t have a dogma. It doesn’t have all of these straight up-and-down rules. It’s not black and white.” In an effort to explain the value of a horizontal hierarchy, Ty added, “It really does live and breath with people who practice it. And that is immensely helpful when we live in a world where we are a minority.”

You won’t find pentacles or velvet-draped altars at any of the Lamplight Circle gatherings. Even some of their most sacred rituals look more like summer barbecues than Pagan celebrations. Pot-luck dishes litter folding tables; families and friends exchange pleasantries. The atmosphere is warm, inviting, and completely different than many popular movies and television shows depict. Despite its growing popularity, Paganism is still often confused with Satanism and the manufactured images of Wicca and Witchcraft produced by Hollywood. This leads many to write-off Paganism as either “scary” or “silly”.

For Tulane University sophomore, Caroline Lagow, the latter was true. “I thought it was fake and something that people made up in medieval times and during colonialism to explain circumstances people couldn’t explain. I never thought it had validity.”

These kind of claims are what groups like Lamplight Circle actively seek to invalidate. Ty and her fellow Pagans have been successful in creating relationships with their communities built on mutual understanding and positive engagement. She attributes this success to the increased presence of public events that create an interactive environment between Pagans and New Orleans’ communities. “That [success] can be attributed to the presence of the Greater New Orleans Pagan Pride Project, of which I am also a founder, and I think that has definitely helped to make Paganism a little more mainstream. I think we have had a lot of really good interaction with the general public at large.” She pauses before continuing, brimming with pride. “I think that public events like the New Orleans Witches Ball have allowed other, smaller groups to kind of step more into the spotlight.”

In New Orleans in particular, there has been a noticeable shift in the public perception of Paganism. Magic and individuality have been essential for creating the whimsical environment that draws tourists and new residents alike to the Crescent City. This is not to say that discrimination does not still happen to Pagans, but Ty cites small, irregular personal bias rather than “…discrimination on the governmental or business level.” Ty attributes the development of widespread acceptance and the creation of new Pagan groups to, “The constant stream of people moving to New Orleans who also come from areas and backgrounds with a lot more open-mindedness.”

She adds, “They’re definitely helping to foster this push, this movement in New Orleans for more pagan groups, more interactions between those groups, more events. We actually have a lot of events, and a lot of things that go on in the New Orleans area that are geared towards Pagans, Witches, and Wiccans.”

The movement that Ty references has also included a large rise in activism in the New Orleans Pagan community. The Lamplight Circle has been extremely active in New Orleans, using their pooled power to feed the homeless, plant trees, and engage in social and political activism. Part of their desire to help is derived from their role in nature as defined by Paganism. “…our presence here can be seen as either being something helpful, which is absolutely a part of pagan spirituality,” Ty continued, an air of concern in her voice, “We are part of this cycle. We need to find our place within it. Or it can be hurtful because human beings are incredibly destructive and our population is increasing every day.”

To explain her role in the cycles of life, Ty referenced deep ecology, otherwise known as the Gaia Hypothesis. “Where you’re essentially looking at the earth, instead of looking at it as several different things kind of thrown together, you’re looking at it as one living, breathing organism. So when you think of it that way, it’s really easy to see how people like me could believe that that is divine.”

Pagan groups and individual practitioners have played an essential role in educating the New Orleans public about these issues. Caroline’s perception of Paganism shifted after participating in a Wicca ritual. “It was really eye-opening. I saw witchcraft specifically as a connection with the environment. It was a way of life and much more peaceful than what had been portrayed in the media. Also, the members’ connection to their religion and their faith is just as strong as anybody’s in the Catholic church.” Caroline now considers Paganism an important part of her life in New Orleans. “It’s an important pillar of the city,” she continued, her hands clasped in front of her, “most New Orleans resident don’t know or don’t think about it.”

Encouraging people to embrace Paganism has been challenging. Changing perceptions has even been difficult within her own group. Encouraging people to think about their environmental impact has been a major hurdle for the Lamplight Circle. Paganism is deeply rooted in a shared connection with nature. According to Ty, Paganism and environmental activism are inextricably linked. When asked how Paganism plays a role in her role as an environmental activist, Ty said with a smile, “Having a really close relationship with nature, you begin to think about ecosystems and you begin to think about cycles that exist within nature. And you think about how human beings interact with these cycles.”

Ty cannot rely solely on her charms to encourage Lamplight Circle members to change their relationship with the environment, she must lead by example. She references sharing her experiences as a way to motivate others. “Really, the best way that I can kind of phrase that is just sort of living as an example for people. You know, being somebody who is really driven to live a better life, have a smaller carbon footprint, reduce and reuse their plastic consumption, and are willing to maybe show people some of the environmental issues that are going on in Louisiana.” Through this, Ty says, “…a lot of people through common sense and an attachment to their spiritual practice, they realize the value of it.” The value of activism for Pagans is twofold. First, that they’re advocating for causes they believe in. Second, they’re building positive relationships with their communities over shared interests.

Reflecting on the achievements of Lamplight Circle, Ty is most at ease. Every aspect of her life is tied to her Pagan roots. To a religion that has given her so much, she believes she owes more. “When we are really passionate about something, you know, that passion sort of becomes contagious,” Ty beams, adjusting her thick, black glasses, “There is more to do.” As for the city that has welcomed Paganism with open arms and jagged streets, there is much more to learn. Paganism only adds to the permissive, eccentric nature of the Crescent City.