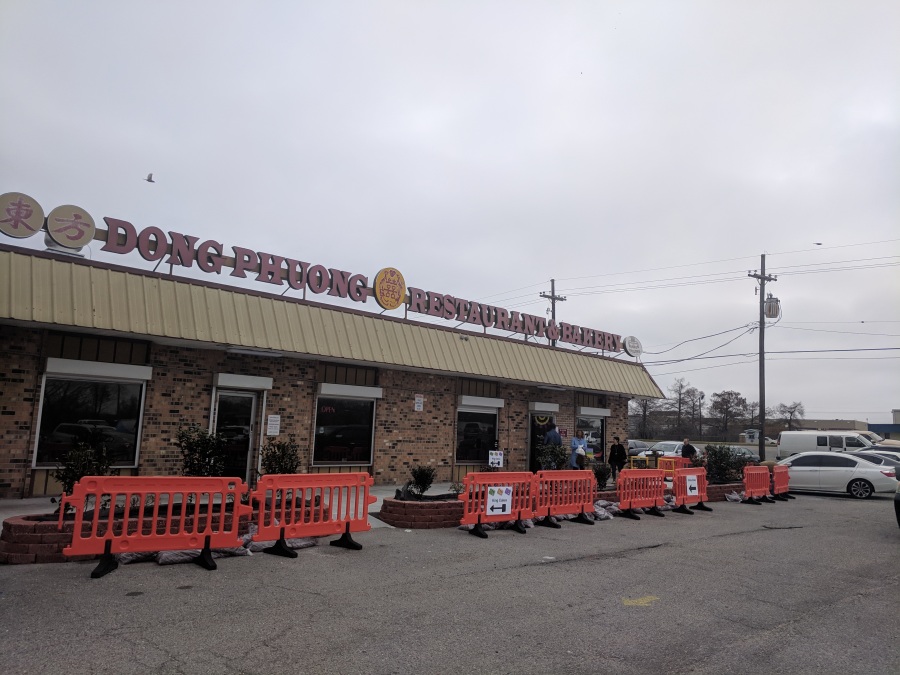 As Mardi Gras approaches, hundreds are flocking daily to a non-descript parking lot in New Orleans East to get a chance at the King Cake from Dong Phuong’s Traditional Vietnamese Bakery. On a cloudy and grey New Orleans morning, the line stretches across the entire football field-length parking lot and down the side of Highway 90. You can hear Vietnamese spoken from inside the first of three buildings that constitute the bakery. Outside, many lament not knowing of the new online ordering process.

In recent years, members of the New Orleans community would line up as early as 1:00 in the morning at Dong Phuong. In response to the increased demand, Dong Phuong introduced a new method for ordering King Cake. This year, one could reserve a cake online with the expectation of receiving a date on which they could pick it up. There is a maximum of three cakes per customer. “Online ordering has helped tremendously with the long lines,” Kensi says. However, the lines are still staggering.

While nearing the front of the line, it is common to hear exasperated customers saying things like, “Y’all are all out of traditional? Damn, What time you open, 8? I’ll be right back here at 7 tomorrow then ma’am.” Customers further back in line take notice. 7:00 may not be early enough.

The King Cakes are offered in 5 flavors: traditional, cream cheese, strawberry, cinnamon, and pecan. The cream cheese is by far the most popular. As Arthur Loughlin, the manager of Dong Phuong, noted in a segment aired on WVUE, the cream cheese icing counteracts the overwhelming sweetness of the traditional King Cake.

“You know some people like all that gooey, sweet icing with the sugar on top. You know, sweet sweet sweet, and this is not that. It’s more of a French style,” says, Paula Nuber, a Slidell resident. Nuber has been driving the relatively short distance to Dong Phuong for her annual fix of King Cake for a few years now. Today, she walks out with one traditional and one cream cheese flavored cake. “I get the traditional for my kids,” she explains.  Although the inclusion of cream cheese seems unorthodox, Dong Phuong bakery very much operates as a traditional Vietnamese bakery; the French baking traditions dating back to French colonial rule inform the decisions made by Tran, the head baker.

The King Cake at Dong Phuong is a tradition dating back to 2008, but after the bakery won a James Beard American Classic award back in 2018, many customers worry that the demand for the cakes would outweigh the supply. The American Classic award is given to restaurants that represent their community in an outstanding manner. Dong Phuong not only connects New Orleans traditions like King Cake to the Vietnamese community in New Orleans East but also introduces well-made staples of Vietnamese cuisine such as bahn mi to the New Orleans community.

Although the cakes are delivered to various warehouses and grocery stores for an additional eight dollar fee per cake, Kensi, an employee of Dong Phuong, warns that the best way to ensure that one would receive a cake is to “drive on out [t]here.” The increased popularity of King Cake in New Orleans undoubtedly plays a role in the absurd lines at Dong Phuong. “It just didn’t use to be such a big deal,” says Susan Sproull, a loyal Dong Phuong customer. “I feel like King Cake has always been a big deal in New Orleans. You’d always hear about Haydel’s [Bakery] and Randazzo’s, but all this waiting out in the parking lot all day is new,” Laura Taylor of Old Metairie says. When asked why she drove all the way from Old Metairie, Taylor offers a simple answer, “It’s the best.”

The demand for the cakes has not slowed down. Online orders typically reserve a cake for the customer, but the customer still must wait around three weeks before they can taste it. Kensi, who works the line providing online order pickup, estimates they sell an average of 250 to 300 cakes a day through online pickup orders, alone. Online orders have already sold out for the year, and Dong Phuong sees no way to increase its output of King Cakes.