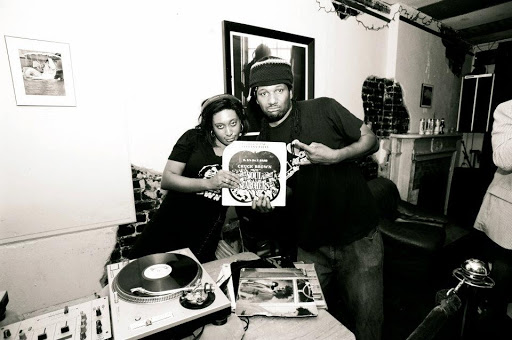 It’s Friday night at One Eyed Jack’s and the bar is radiating with funk music and good vibrations. All eyes are on Melissa Weber, better known by her stage name, DJ Soul Sister, as she mixes vinyl records with a variety of tempos to create the quintessential dance environment. DJ Soul Sister says, “I only play music that I love and am inspired by.”

Since beginning her DJ career in 1997, Weber has managed to stay true to herself and the style of music that she enjoys, despite the techno direction that the music scene is headed in. Weber says that her work as a DJ is grounded in her passion for music. Objectively, her greatest skill is her ability to seamlessly improvise during her sets through matching music keys. It takes a certain sense of musicality to be able to mix vinyl in as smoothly as she does. Is this skill innate or can it be fostered through a musical upbringing? In Weber’s case, she has been surrounded by music her whole life, but it’s evident that regardless of her background in music, the skill she possesses is inherent. Weber played the violin in third grade, piano in middle school, and took some bass lessons in high school. It seems as though the idea of music interested her more than any one specific instrument, hence the inconsistency throughout her childhood. For some people, music just flows through their veins; they understand and internalize it in a way that others cannot. Melissa Weber is definitely this type of person.

Weber began her career during a unique time when technology became closely intertwined with music in the DJ world. In all of her work as a DJ, she makes it a point to stay true to the music. That’s not to say that she is against the use of technology, but she wants to “make sure that you are using the technology, and that the technology isn’t using you.”

Weber recounts that she didn’t actively pursue a career as a DJ, but by following her passion for music, it grew into something for her. Growing up in the Carrollton area of New Orleans, she began collecting vinyl records at only six years old, and continued doing so well into her adult life. In the late 80’s, MTV aired a one hour special on Saturday nights called Yo! MTV Raps which caught Weber’s attention. She recalls watching the DJ set of Salt-N-Pepa, Spinderella, on the show and she described it as, “the first time I’d ever seen a woman DJ with vinyl records.” Weber giggles as she fondly remembers when someone once told her she looked like DJ Spinderella. “It sparked my interest in being a DJ myself, so I bought my first DJ starter kit on my Loyola credit card when I was a student there.” As a freshman in college Weber volunteered at WWOZ, a local radio station in New Orleans. She started with the usual intern work, and then gradually made her way up. Later, she began to record voice overs and PSA’s for the station and eventually received her own two hour R&B show once a week.

Weber’s long-time friend and MC, Charlie Vaughn, aka Uptownz Illest, has watched her DJ career unfold and flourish since they both worked at WWOZ in 1995. Vaughn comes from a real hip-hop background, so he says that she caught his attention when she played the basics of New York hip-hop during her R&B show at WWOZ. He began to request songs for her to play, and “the rest is history. We just clicked as far as music.” He remembers that she was confident on the radio, but initially extremely hesitant to perform live. “She was kind of shy and kept making excuses as to why not.” Eventually, she overcame her fear and performed at The Caddyshack on Poydras Street. He remembers thinking as he saw her on stage that night, “This is what I’ve been waiting for half my damn life. She played records back to back to back and the crowd loved every minute of it. She was on fire.” Vaughn explains that the more she performed, the better she got. Weber made a name for herself in the industry as DJ Soul Sister, and fans began to regard her as the “Queen of Rare Groove.” Rare groove is a catch-all term that refers to soulful music from the 70’s and 80’s. This consists of a mix of funk, disco, rap, Brazilian, reggae, post punk, afro-beat, salsa-beat, New Orleans meter music, and a variety of other styles. Weber says, “I don’t want people to get comfortable with something just because they’ve heard it 15 times over. What’s the fun in that?”

Vaughn explains, “What made her stand out was her ability to play so many different styles of music. She would play stuff you had never heard of or just forgot you knew.” Beyond that, Vaughn says, “Weber is so knowledgeable about music—she has an expanded catalogue of musicians stored in her mind. She also seems to know exactly what the crowd wants to hear. She plays off of feeling, and the audience loves it.” Vaughn considers himself the “hype man” for DJ Soul Sister’s sets. “She could do it with or without me though; she’s just that talented.”

When asked about the gender disparity in the music industry Weber says, “I embrace being a woman in this male-dominated industry.” That being said, she recounted many times during her career when sound engineers assumed that she didn’t know what she was doing simply because of her gender. “You have to be assertive in order to be taken seriously in this field,” Weer explains.Due to the fact that there are less women in the DJ scene then men, women tend to be categorized as female DJs rather than just DJs. This reinforces the stereotype that a woman behind the decks is atypical. Because New Orleans mostly consists of live music, the city didn’t know what hit them when Melissa Weber entered the scene in the late 90’s. She was consistent with her mission from the start: play music that she loves and in turn, the crowd will love it too. In “Ladies’ First,” a profile on DJ Soul Sister with Medium Music, Bridgewater says that, “Gender disparities never crossed DJ Soul Sister’s path because her self-sufficiency and detailed focus didn’t allow them to.” Vaughn recounts that, “I knew a few female DJs, but they were nowhere near as interactive as she was with the crowd.”

Vaughn refers to Weber as, “Sis” which is a testament to the close bond they’ve shared for over 20 years. Today, Vaughn works as an art teacher at a local public school. They still do shows together. In fact, they recently performed together Mardi Gras weekend with Biz Markie. They’ve performed at numerous Jazz Fests over the years opening for Cee Lo Green, Sugarfoot, and Tina Louise. Vaughn says fondly of his long-time friend, “I tip my hat off to her every chance I get. I’m just grateful to be a part of what she’s doing as a musician as well as an educator of music.” Weber is a legacy amidst the New Orleans music scene for her many years of excellence as a DJ.

In addition to being DJ Soul Sister on the weekends, Weber is working towards an MA in musicology and also holds a full-time position as program manager at Tulane University. When I attended Weber’s event at One Eyed Jacks, I noticed something that I found to be quite peculiar: she was performing barefoot on stage! When asked about this, she replied, “I’m not just DJing; I’m expressing myself through music and I want people to feel it to the fullest extent. I have to be comfortable, and that means being barefoot. I don’t like shoes!”

Weber’s shows are always packed because of her unique capability of transporting you  back to another era. Erika Rosner, a 21 year old student and fan, explains how a DJ Soul Sister performance is not just a music show, but rather an experience. She says, “It’s like I’ve stepped back in time when she’s on stage. A wave of nostalgia rushes over me and it feels incredible.”

When asked about her favorite part of the shows, Rosner says, “I love how she turns around and fingers through the vinyls to pick out which one she’s going to play next. It all feels very authentic. I’ve never seen another DJ do that before. DJ Soul Sister is absolutely up there as one of my favorite musicians to see live in New Orleans. What a performer!”