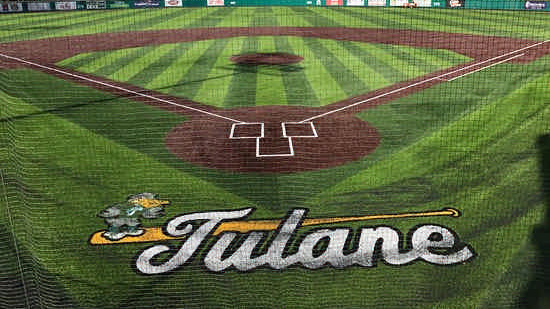 It was the middle of March 2020, the coronavirus appeared to be a distant threat and people still attended public gatherings without a second thought. On this particular night, March 11th, there was an abnormally loud crowd at Greer Field at Turchin Stadium. New Orleans has never been a baseball city, but over 1,300 fans rallied to show their support for the Green Wave. Tulane University’s baseball team was in the midst of a historic run, and that night they wrapped up a series sweep of the Lamar University Cardinals with a 6-3 win. The victory was Tulane’s ninth in a row, the program’s longest since 2010. The Green Wave’s 15-2 record matched their best start to a season since 1972. With a revamped pitching staff and an already robust offense, Coach Travis Jewett and his team felt invincible.

“The kids are getting what they deserve,” Jewett told me, “You feel like every day the kids come to the yard, they are going to find a way to win.”

The next day, American Athletic Conference commissioner Mike Aresco announced the suspension of all spring sports competition until further notice due to the outbreak of COVID-19. Within the week, the AAC followed the actions of other top conferences, officially canceling all athletic competition and championships. Tulane’s baseball team, nationally ranked for the first time in eons, lost everything they had worked for all season.

While there are clearly pressing health conflicts plaguing the world, the loss of sports is being lamented by many fans around the globe. Even more so, the athletes whose livelihoods are determined by their impact to a team can make no impact whatsoever.

Though most people can complete their work from home, athletes do not have this capability. Factoring in the people who work in and around sports, a huge portion of the unemployed population can be attributed to sports.

While covering Tulane’s baseball team I got to know many writers, scouts, broadcasters and more. All of these men and women are now out of work. A writer for the Times Picayune, Guerry Smith, covers Tulane and receives compensation for each story he publishes. With no games being played, Smith is struggling for content. His Twitter account mourns the loss of baseball.

“The Tulane baseball team would have wrapped up its home AAC opener against Houston in the last half-hour or so in the pre-coronavirus world,” Smith wrote on April 3rd.

With so many people out of work across the nation, a large portion of the currently unemployed force will be re-hired and reinstated once the coronavirus becomes a memory. The same cannot be said for the myriad of college seniors across the country.

College athletes are not paid, in fact they are often paying for their education with their impact on the field. In effect, universities are losing revenue and income.

With the sporting world turned upside down, there remains hope for a speedy return to normalcy. College seniors are the one group who won’t recover, robbed of the final act of a lifelong mission.

The gravity of the situation was immediately felt by student-athletes. Tulane sophomore pitcher Grant Segar was devastated after AAC commissioner Aresco announced the cancellation of the season.

“Heartbroken. This group is so special,” Segar said. “Highlight of my day is walking into the locker room to hang out and play the game I love with my best friends. Whatever the future holds, I’ll never forget this group.”

For Segar, multiple years of eligibility remain. He will be back in New Orleans, back at Greer Field and back on the mound. Segar wasn’t heartbroken about the loss of the season, but for the loss of the seniors.

Tulane University will say goodbye to 35 seniors across all sports, including seven baseball players. Subsequently, 13 juniors will miss out on a once in a lifetime opportunity to sign with a Major League Baseball team in the summer. For these juniors, they may have another chance the following year but very often it is the junior year that garners attention from MLB teams.

Every baseball player grows up with their eyes on “The Show”. The seven seniors and 13 juniors have been dealt treacherous news in their lifelong pursuit of glory.

On April 12th, Major League Baseball announced the annual amatuer draft can be held as early as June 10, the original start date, or pushed back as late as July 20. The signing deadline will be no later than Aug. 1. While there remains a glimmer of hope that the draft still occurs, each day that glimmer fades. Even if, thanks to a stroke of luck, the draft does occur, “MLB can cut the draft from 40 rounds to as few as five”. The typical draft is 40 rounds of 30 picks. After the draft, a large portion of the 1,200 players selected will sign professional contracts and begin their careers.

“I tell you what’s going to happen, you’re going to crush the dreams of kids playing baseball,” said San Diego-based agent Lonnie Murray. “The opportunity is lost now. You had kids excited about what was supposed to be a pivotal moment in their life, getting drafted, and now that’s gone.”

For the juniors, there still remains hope for that opportunity. Pitcher Braden Olthoff, named American Athletic Conference Pitcher of the Week in consecutive weeks leading up to the shutdown is one junior who exemplifies the weight of the season’s cancellation. Before the season began, the long-haired California native didn’t hold back about his expectations.

“I hope to have a really good season and hopefully get a look in the draft,” he said. “I want to play professional baseball.”

Olthoff was by all metrics one of the best pitchers in the country this season. His success was sudden, but sustainable. He seemed poised to break into the major league ranks, but his season has been cancelled and his body of work tainted. Olthoff was sure to be one of the 1,200 names called in the MLB draft, but if that group was cut to just 200 he would clearly be at a disadvantage. If the draft doesn’t happen at all, Olthoff will need to replicate his magical performance while avoiding any injuries or setbacks. With his goal in sight, the goal posts were moved.

While Olthoff may still get drafted, his senior teammates likely won’t be so lucky. Despite the NCAA ruling for an extension of eligibility for spring sport athletes, Tulane’s seniors are going to graduate from school thus ending their careers.

Last summer, Grant Mathews was drafted in the 38th round by the Atlanta Braves. He returned to Tulane with the intention of playing his final year to increase his draft stock. After a torrid start to the season, Mathews’ plan seemed to be coming together. He hit a ridiculous .373 with 25 hits, including four home runs and four doubles before the season was axed. He looked like a lock to best his 38th round selection from the season before.

Just over a month later, Mathews appears to be out of luck. The draft may not occur, and even if it does his chances of being selected will be less likely due to the shortened nature of the draft.

Mathews, Luke Glancy, Jonathon Artigues and Keagan Gillies headline the senior class being deprived of a chance to play professional baseball. Each of these seniors will be graduating from Tulane and moving on from baseball. Should they continue their education, each player would be allowed one more year of eligibility. With this is mind, it is near impossible to make this happen on a whim. Furthermore, these players have the goal of becoming professional athletes, not lawyers.

While many players are missing out on potential professional careers, nobody exemplifies this tragedy more than Mathews and Artigues. Both redshirt seniors, the two infielders had a chance to be included in the 1,200 player draft this summer. Now with the draft likely left in ruins, both players are looking past their baseball careers. Though no decisions have been made official, Artigues is “just thankful for the opportunity to have experienced all that I have on and off the field.” Mathews followed suit in referring to his Tulane career in the past tense.

“To have gone to such a highly respected educational institution in my hometown, while playing collegiate baseball has truly been the best time of my life” said Mathews.

It is impossible to look at Tulane’s 2020 season without wondering what could have been. Above the individual players’ futures, the fate of Tulane baseball comes into question.

Once a giant in the baseball world, Tulane had been mostly dormant since 2005. This season saw the Wave jump out to a 15-2 start, the best start to a season since 1972. The pitching staff was much improved, the chemistry through the roof. This was Tulane’s best chance at appearing in a college world series after a drought spanning two decades. It has taken some time to accept the fact that all of the momentum for this team has been halted. The subject is so touchy that nobody is talking about what happens next.

Only Grant Mathews could accurately shed light on the situation. Clearly devastated by the premature ending to his baseball career and quickly vanishing dream of playing professionally, Mathews still managed to show off his trademark positivity.

“I am forever grateful for my time at Tulane.”

While Tulane supporters were robbed of an epic season and the players are suffering drastically, it is the memories and the good times that shine through for Grant Mathews. He and the rest of Tulane’s departing seniors are going out into a world forever changed by the coronavirus, ready to make an impact in their respective fields, even if it isn’t a baseball field.