The pulse of Jackson Square permeates through the entirety of the French Quarter. Rhythms, words, illustrations and spirits encompass the perim 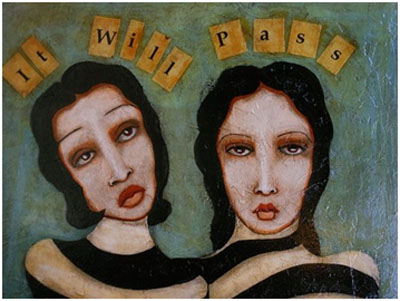 eter entirely. Unsurprisingly, as part of this network of lives there are scattered semi-permanent fixtures; the population ranges from brass bands, guitarists, tarot card readers, artist, locals, commuters, and vagrants. However, these fixtures are not all treated equally as members of the square. Two representative figureheads stand out as members of the main sub-societies.

As the sunbeams and casts shadows onto the park fences and foliage, artists begin to prepare for a day of exhibition. Schedules range from setting up at 3AM on the weekends, to milder 8AM on weekdays. Oregon native, Sherry Dooley, refers to herself as a rarity amongst the population of the square. Despite her self-assigned title, she is one of the selected 200 artists granted a yearly artist permit. After four years of frequenting the square, Dooley has determined that Saint Anne Street is as she put it “prime real estate.”

Having built her way up from the free for all permits handed for Pirate’s Alley exhibition she now has a place on the fence. Beside her artwork a sign reads in all CAPS, “I am an artists, this does not mean I will work for free. I have bills just like you. Thank you for understanding.”

Yet, Erin McCutcheon, a well-traveled art historian and professor at Tulane University, explains it this way, “What defines being a ‘real artist’, and what doesn’t? The lines get blurred when we enter postmodern period of anything can be art, and especially in performance art.”

When asked about the vi­­­be of Jackson Square through the day, Little Fae Sway says, “Big, big, difference! It’s like night and day. There are three times as many readers at night, the energy is chaotic, it’s a whole different nature of the beast.” While, Sherry Dooley mentions that, “We’re (artists in Jackson Square) not afforded the respect I think we deserve, we’re treated as if we’re out here for free as if we should be grateful.” Here, the artists are lumped together with the readers. Yet, artists must be permitted to exhibit, while the readers come and go by their own devices.

It is clear as day that, Sherry Dooley is a strong female artist with depth and a message. Hopping to and fro as a public street merchant and gallery exhibitionist, Dooley has earned a spot as a sort of legacy in the square (city council prefers to give reoccurring permits to already selected artists). Ranging from 100 to 1000 dollars, it is no surprise that Dooley has been a member of many successful exhibits, is represented by two New Orleans galleries and given a show announcement in The New York Times. Unlike many French Quarter clichéd art-works, Dooley’s work is informed by her personal experience and furthermore by the female experience. Dooley is adamant about her intentions. She feistily explains, “When I first got here they said,  ‘you need to put a Bourbon St sign on there or fleur-de-lis.’  And I was like, ‘Um… That’s soul sucking art and it’s shit art, people who like that can go buy t-shirts.’  I’m not a tourist artist.” She attributes her success to her unwavering aesthetic of depicting women’s thoughts and feelings, for this reason she seldom illustrates them smiling.

As the day progresses into night, and the sun sets, the artists begin to pack up their masterpieces, and the square around the foliage of the garden is lit up but the incense and candles of the readers. Amongst them, at the corner of Saint Anne St and Chartres St is Spiritual Advisor, Little Fae Sway.

A fairy in her own right, forty-something-years-old oracle Fae Sway has waist length brown hair that is sprinkled at the roots with greys of wisdom. Dressed in earth tones, she sits on the square surrounded by her knick-knacks and oracle artifacts. Ranging from the homeless residents awoken by power hoses to the tourists who want a memory to take home, Little Fae Sway grants knowledge to anyone who wants to listen. Free of charge, Fae Sway sets up her stand six days a week, from 5 AM to 11 PM. Along with her fellow performers, she maintains by the rules that entail the repercussions for charging instead of merely accepting tips and donations range from being asked to leave (sometimes permanently) to getting ticketed and fined. As the church bells ringing in the backdrop, Fae clarifies that she works on donations only. In her words, “Spirit sent me for the locals, but I get by with the help of the tourists.”

Similar to Dooley, Fae Sway’s craft is informed by her own source. Source, the term she utilizes to define the center of someone’s beliefs regardless of what they may be, matters deeply to her thirty-year-old calling. Little Fae Sway’s source, spirit, as she has come to know it, brought her dragging and screaming down to the French Quarter, despite her aggressive and adamant denial. Fairy’s labor of love was directed, like that of many New Orleans residents, by the calling of “NOLA”. Fae Sway describes that “NOLA” has it’s own spirit, beyond the spirits that dwell in New Orleans, the spirit of the city itself and it’s own mystical collective conscience.

Because of  “NOLA”, Fae Sway is in Jackson Square to spread the message, not preach, but instead help those who need guidance. Yet, she strongly states, “I’m certainly not her (NOLA’s) blood and heart beat, she does not need me at all, she alive and well without me. And that’s fine. She allows me to be in her city, and she allows me to follow my calling and do what my source asks me to do, and then she tacks on a few things. That’s how I look at it.”

Art historian Erin McCutcheon grants some insight into why this drift may occur. Having visited many countries and admired many traditions McCutcheon links readers with a trip to India where her fortune was told. She mentions that these realms of performance are based on specialized knowledge in reading cards and the theatricality of doing so. Yet, more and more often people are less likely to consider these readings a performance, and view it more as a service or  “fabric of society.”  Often, these psychic services are also associated with people who are not of a Euro-American status of hierarchy making one art form more “believable” than the other. In her words, “There is still a delineation between high and low culture, where the painting hung on the wall is okay to pay for because there is a whole structure and infrastructure behind it toward supporting the artist as an intellectual.”

Dooley feels she has earned her place on the fence and is within her rights to ask for hundreds of dollars for an artwork. Though she is smart in doing so, she is mostly allowed and entitled to display and request payment for her works because of the social constructions of viewing and appreciating art, while Fay Sway must preform free of charge. McCutcheon continues to explain that; “Viewing a performance or interacting with a person who is doing a performance for you isn’t seen the same way. The infrastructure isn’t there for the readers to be supported.”

Readers are associated with a culture that is integral to the New Orleans experience, like Voodoo and Creole culture. These traditions have become outmoded so people are prone to ignore the artifice of psychic readings despite their link to the history of New Orleans. For this reason, residents and visitors alike have been taught to pay more attention to the writing on the wall, or in this case, on the fence while simultaneously perceiving readings as an unnecessary service.

“There is no pussy footing, sugar coating, fluffing around the edges, or going over any nook and cranny of your intimate life. I’m just here to give you a message,” as Little Fay Sway puts it, and the message is a clear as can be. Jackson Square is slowly but consistently loosing its traditions, but it’s not too late to keep it alive.

“To me nowhere in the United States is like New Orleans, and sometimes when I come back into the city, I feel as if it’s frozen in time,” says McCutcheon. Despite the historically prevalent culture of New Orleans not all residents and visitors share McCutcheon’s insight in seeing this as a city swimming in tradition and prefer to perceive Jackson square as nothing more than parlor trick central.

Rubi Ferras is a sophomore at Tulane University where she is completing her degree in Studio Art.