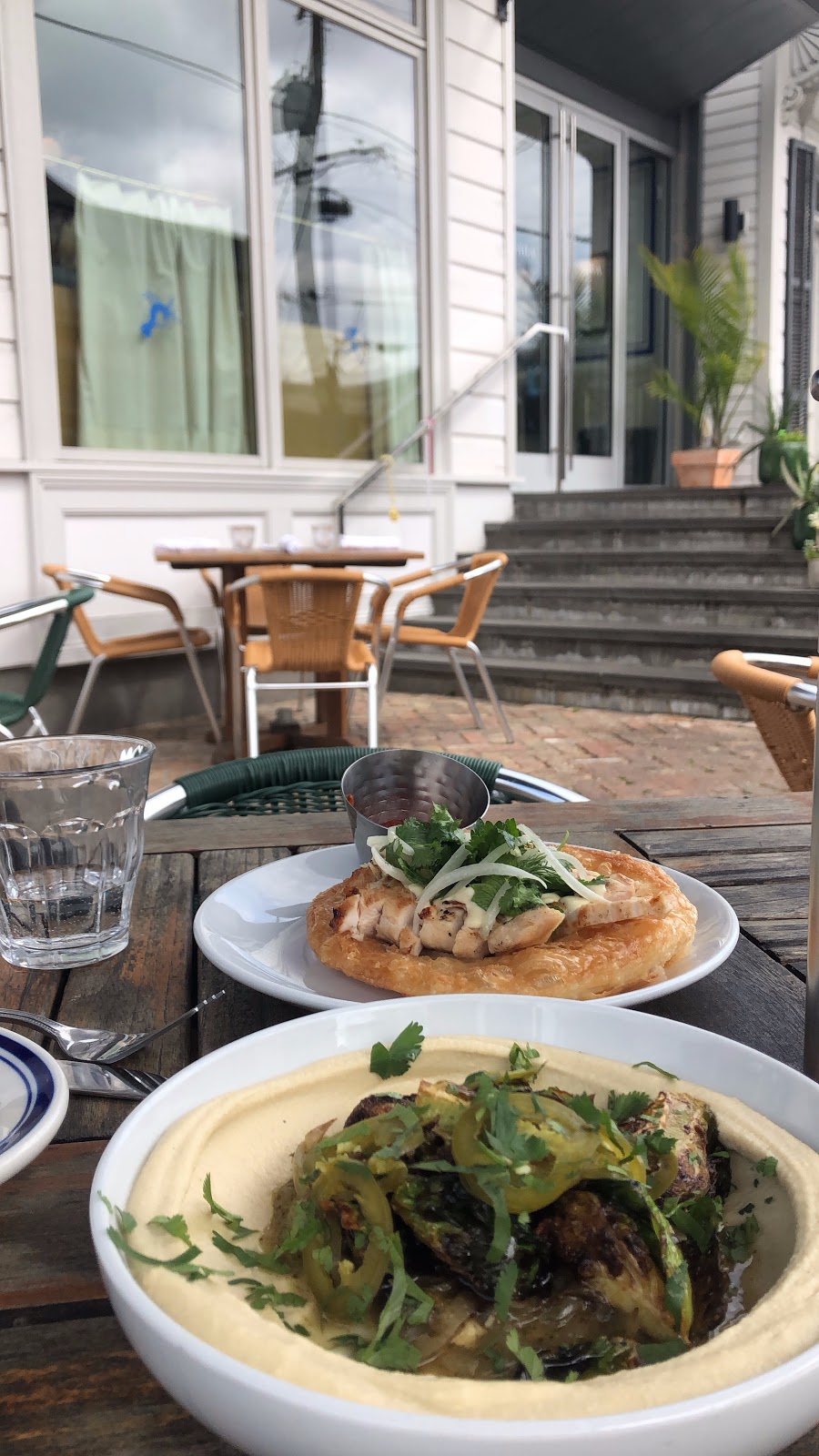 The sidewalk, its haphazard inclines a by-product of Katrina, overflows with hungry pedestrians on this sun-drenched Saturday morning. Clusters of people amble down Magazine Street and the French Quarter alike, seeking out their ideal brunch spot. The choices are limitless and diverse— something for everyone. The aroma of freshly made guacamole from Del Fuego’s Taqueria fills the air, blending with the age-old sent of Casamento’s timeless fried oysters. Across the street at La Petite Grocery, diners enjoy Turtle Bolognese, a creative twist to a traditional New Orleans dish. As new and old cultures, cuisines, and flavors intermingle throughout the city’s contemporary restaurant scene, one can’t help but wonder what sparked this culinary burst.

“I think as human beings, as people, we don’t always embrace or look for radical change in our lives, or in society,” Chef Frank Brigtsen reflected. “Often times, significant change is created by circumstances. And that could be devastating circumstances— like a war, some kind of upheaval, or a storm,” said the New Orleans native.

Hurricane Katrina hit the city in 2005, forcibly changing a familiar way of life for many. The storm disrupted New Orleans’ appearance, structure, and inhabitants— but also its static nature. “I think that we, as a city, were a little bit laissez-faire before the storm,” said Brigtsen. “We let things slide and we were a little stagnant perhaps.”

While the disaster caused severe damage and loss, the city gained a lot from the circumstance as well. People from all over the world flowed into New Orleans, eager to be a part of the rebuilding and revival of The Crescent City. These individuals not only brought assistance, but also an array of distinct cultures, tastes, and palates to the new New Orleans.

One of the biggest effects Katrina had on the city was a shift in demographics. “A lot of people left, and weren’t able or chose not to come back,” said Brigtsen. “But that void was quickly filled by others who came to New Orleans for various reasons.” Following the hurricane, the city lost many native-born citizens, yet acquired an influx of people that grew up elsewhere. Thus, change within New Orleans was inevitable.

It was not just the city presented with the opportunity to reinvent itself— the event of Hurricane Katrina caused many individuals to pause and inwardly redefine their purpose and commitment to New Orleans.

For Chef Alon Shaya, Katrina helped him realize what he was destined to do with his talents. Shaya moved to New Orleans in 2003 to pursue his culinary career, cooking classic Louisiana food prior to the storm. However, the traumatic experience of Katrina caused him to contemplate, “What am I doing here, why am I in New Orleans, and what can I contribute to the city to make it come back alive?” He considered, “Would another bowl of gumbo help do that, or would it be more important for me to look inside of myself and express who I am?” And so, that’s what he did.

Katrina led Shaya to reconnect with his roots, integrating his own heritage into New Orleans with the introduction of new Israeli as well as Italian restaurants to the city. “I think for a lot of other people as well, it gave them an opportunity to do what they were passionate about and be themselves,” Shaya said.

Living through Katrina prompted similar inner-cultural awakenings amongst many of the city’s inhabitants. As a result, restaurants of varied influences arose throughout New Orleans as people began to express themselves more honestly through their cooking. The industry not only grew in numbers with the amount of restaurants, but also in diversity with the types of restaurants. “I jokingly say,” admitted Chef Brigtsen, “‘its easier to find a taco now than a po’boy’—and that’s okay!”

The post-Katrina expansion of the New Orleans culinary scene sparked ubiquitous intrigue and worldwide fascination. Yet, food has always been treasured as a cultural staple within Louisiana homes. While Shaya and other outsiders continue to refresh the city with unfamiliar cooking, indigenous chefs strive to preserve authentic New Orleans in this post-Katrina landscape. “Now, we have new blood, new vitality, new interests,” said Brigtsen, whose feet are firmly rooted in Creole tradition. But this newness does not frighten him— rather, he welcomes it.

“For me, all of these restaurants are not competition, its community,” Brigtsen beamed. Brigtsen’s Restaurant celebrated its best year ever in 2018, after 33 years of cooking and serving New Orleans’ favorites. In fact, Brigtsen attributes some of his success to the city’s diverse newcomers who introduced a variety of cuisine options to consumers. “The city is different now, and so the context that Brigtsen’s is in, is different too,” the chef explained. Today,when people inquire where to get ‘real New Orleans food’, attention focuses more narrowly on Brigtsen’s. It is not about old versus new, but rather, their association together.

“I think it’s important for us to realize what Creole means,” Brigtsen interjected. New Orleans, well known as a haven for its Creole cuisine, has been shaped by the individual heritages of its aboriginals. Its culinary traditions are an electric hybrid of many different influences, including French, Spanish, Italian, German, Haitian, Caribbean, and even African from slaves. “It is perhaps the original fusion cuisine, if you will, because of the multicultural aspects.”

Creole cooking reflects all the complementary cultural flavors that have impacted New Orleans over 300 years. Thus, Creole is a very expandable concept. It is the melding of unique customs and tastes, ancestries and personalities.

“And so, I think it was important for me, and for us, to kind of redefine Creole,” Brigtsen remarked, alluding to the culinary integration that occurred as a result of the post-Katrina ethnic explosion. Creole is now the harmonization of the contemporary and the conventional, the new and the old New Orleans.

Although the native in Brigtsen was raised with a distinct food heritage, the inventive chef in him likes to keep things fresh in the kitchen. The menu at Brigtsen’s Restaurant changes daily, allowing guests with adventurous palates to taste the alternative foods that constitute modern New Orleans. Nevertheless, Brigtsen continues to carry on tradition, always offering signature dishes such as roasted duck and crawfish. He refers to these age-old menu items as ‘cravers’, the enduring dishes that bring customers back time and time again for that classic taste.

Integrating new elements with cultural customs is a practice comparably employed by Chef Shaya. At his restaurant, Shaya makes hummus and puts crab meat on top. That’s not necessarily something that you would ever see in Israel, his country of origin, but here in New Orleans it seems to make sense. Creole is the balance of where you are rooted, and where you are now.

Just as traditional recipes have been modernized, so has the city’s entire restaurant industry, as well as its overall way of life, for that matter. “I think that is the story of New Orleans—the diversity of cultures that have influenced not only our food, but our culture in general,” Brigtsen spoke through his warm smile.

The intermixing of different ingredients, customs, and people have brought notable benefits to the new New Orleans, and to all whom enjoy it. The modernization of the city’s restaurant scene post-Katrina attracted visitors, accumulated income, grew the local economy after a considerable deficit, and most importantly, introduced the unknown to a rather confined environment. This cultural revolution opened the city to new areas of exploration and acceptance of the unfamiliar. “Embrace the diversity,” Brigtsen spoke with zest, “or you’re missing life’s greatest joy.”

As the story of New Orleans continues to develop, so does its cultural components. It is unclear what the future of the city’s culinary industry holds, but as history serves, it is most advantageous to greet it with open arms and adapt former practices accordingly.

That being said, foundations of the culture should never be abandoned completely. “Even though things are changing and continuing to evolve, the gumbo still needs to be there,” said Shaya. “Although I am doing things that are different, I would be devastated if New Orleans were to lose that.” The transformation of New Orleans post-Katrina demonstrates that the new does not have to replace the old. Rather, it is the consolidation of the two that makes the city’s culture so special and an inclusive place for all.

The collection of distinct identities has crafted, and continues to grow, the exceptional culture of New Orleans, its cuisine, and its colorful restaurant landscape. “You have to understand that and not be afraid of it, but embrace it,” Brigtsen stresses, “because the beauty of food is in its diversity.”